My Masters from the 4th Dimension – PART 1 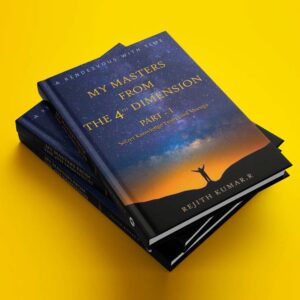 My Master's From the 4th Dimension - PART 1

An autobiography by Sri. Rejith Kumar where he shares his mystic and spiritual experiences spanning 17 years.
Miracles – extraordinary events that lift an ordinary man to experience the mysteries of the universal science, history and spirituality join hands in the right proportion to bestow an ordinary man with exciting and elevated experiences – life becomes nothing short of a thriller novel.
Listen to the trumpets heralding the restoration of Kumari Kandam, an ancient continent once lost. Get glimpses of incredible and mind blowing real-life experiences that proclaim the coming of a new era. This book explains his spiritual journey and will be released this month (November-2022).

My book “Meeting with my Masters from the 4th dimension” is a heart-warming real-life journey of a self-proclaimed atheist awakened to a mystical world of spiritual masters and given a mission of guiding ancient Kumari Kandam (Pleiadian) souls to fulfill their destiny of awakening and co-creating a new world of higher spiritual consciousness”.

My Master's From the 4th Dimension - PART 1
SYNOPSIS