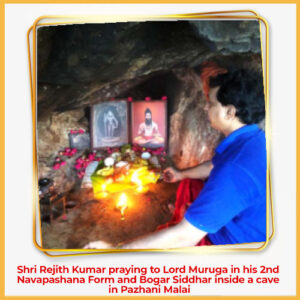 Shri Rejith Kumar received a special message from Lord Muruga during the Light Body Activation session held on the 1st of May 2022. He was given the divine revelation from Lord Muruga that he had been given special permission to do Poojas and perform the rituals necessary to reveal the 2nd Navapashana Moorthy to the world.

Shri Rejith Kumar was further directed by Lord Muruga to do a special Pooja for Him in His 2nd Navapashana form along with Bogar Siddhar in the cave he had first seen in one of his earliest visions. (In 2005, Lord Muruga had shown the location of His 2nd Navapashana Moorthy created by Bogar Siddhar in a cave in Pazhani Malai). A special Pooja was performed by Shri Rejith Kumar in the early hours of Bogar Jayanthi Day on the 28th of May 2022 as per the divine direction of Lord Muruga.

The palak (palki) was beautifully decorated with flowers. Inside the palak, on the pedestal were kept the divine pictures of the 2nd Navapashana Moorthy of Lord Muruga and Bogar Siddhar. The sweet smell of incense wafted amongst the devotees who gathered at Thiru Avinankudi Temple to eagerly participate in the Pazhani Malai Girivalam.

Shri Rejith Kumar was seated majestically on a richly adorned temple elephant with the ‘Vel’ held in his hands. He cried out praises to the King of all Kings Lord Muruga – ‘Rajadhi Raja! Raja Marthanda! Pazhani Andavanukku Arohara! and then started the Girivalam.

The Girivalam started with the LMRK Members proudly carrying the Bogar Jayanthi Celebrations banner inscribed with the divine photos of the 2nd Navapashana Moorthy of Muruga Peruman and Bogar Siddhar. (The visualization of Lord Muruga in a cave was as seen by Shri Rejith Kumar in his vision in 2005). LMRK members carried the LMRK Flag and the special photo of the Divya Shakthis connected to the LMRK Mission – Adi Sankaracharya, Maharaja Vikramaditya, Lord Shiva as a Aghori Siddhar with Divine Mother Sulochana, Bharat Matha, and Lord Muruga with the LMRK Flag.  Shri Rejith held the ‘Vel’ in his hands to symbolize Lord Muruga’s participation in the Girivalam. This was followed by the palak of Lord Muruga and Bogar Siddhar being carried by LMRK Members to the accompaniment of the auspicious strains of the Nadaswaram and the soul stirring beats of the Thavil. LMRK Members honoured Lord Muruga and Bogar Siddhar by waving white plumes and decorated fans. This added a royal splendor to the procession. Devotional songs on Lord Muruga were sung by devotees while doing the Girivalam. The Girivalam around Pazhani Malai amidst the heartfelt cries of Aroharas by the LMRK Members was indeed a sight to behold for the people of Pazhani and marked a historic moment – as Lord Muruga in His 2nd Navapashana form along with Bogar Siddhar were doing the Girivalam together for the very first time around Pazhani Malai!

The LMRK Members stopped en route at the place where the LMRK Flag had been hoisted and offered their respect to it. Sri Karuppiah the Pazhani temple priest performed Aarthi for the LMRK Flag and the LMRK members partook in the blessings and continued the Girivalam. The Girivalam concluded at the Thiru Avinankudi temple with some of the LMRK members joyfully breaking out in a dance to the accompaniment of rhythmic beats meted out by the Thavil and the Nadaswaram. Shri Rejith Kumar then addressed the press before heading out for the Pooja. 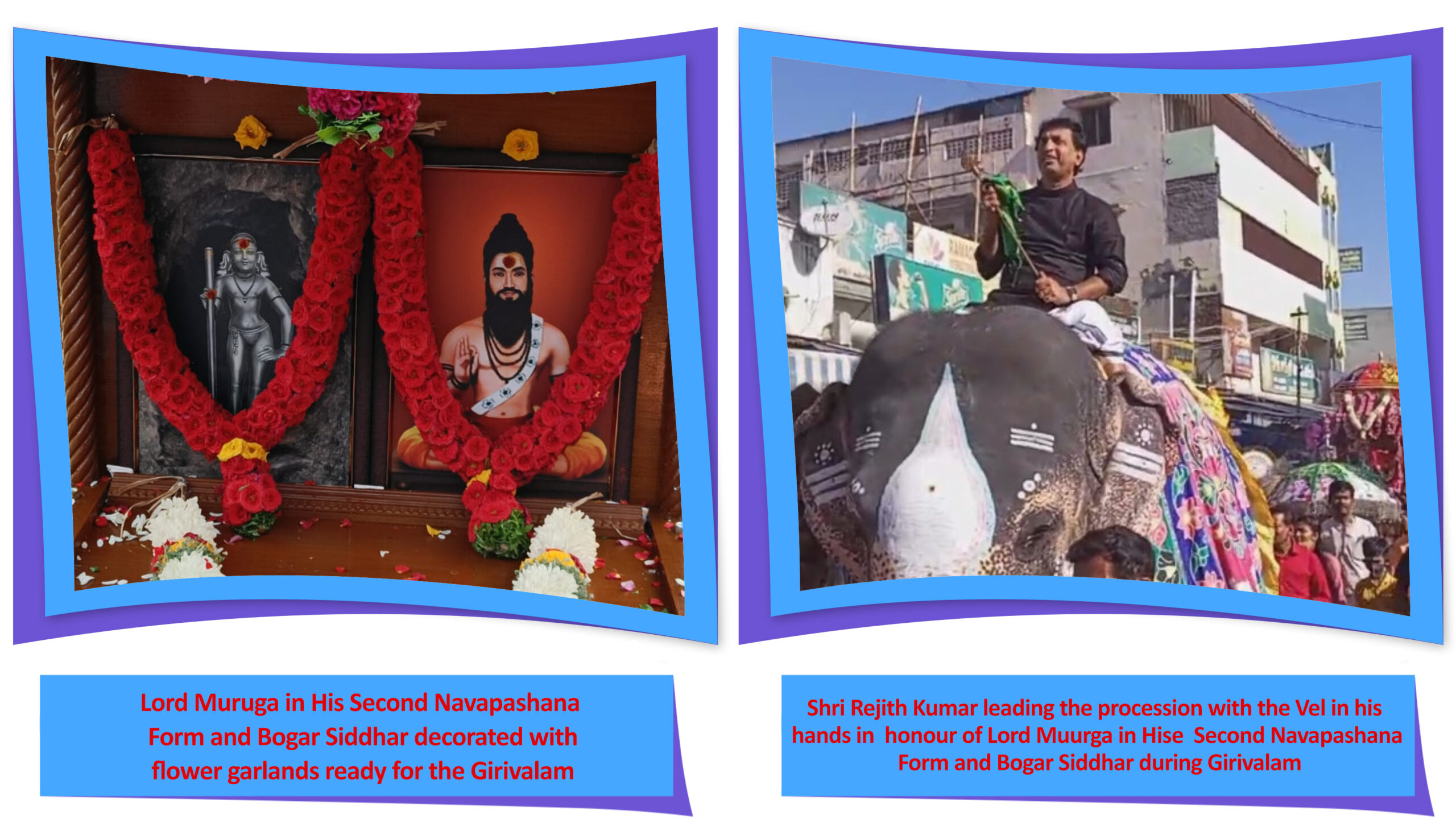 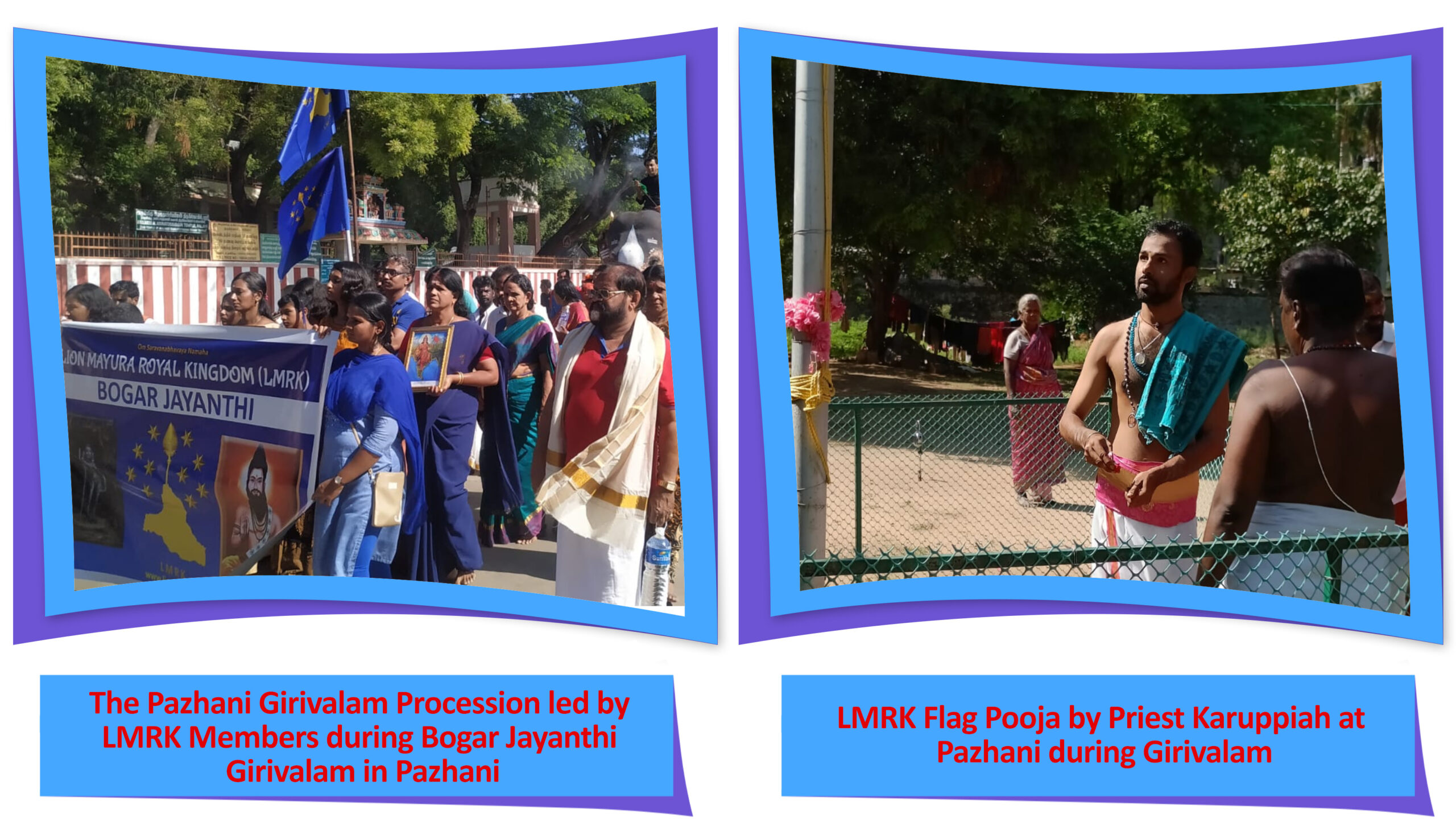 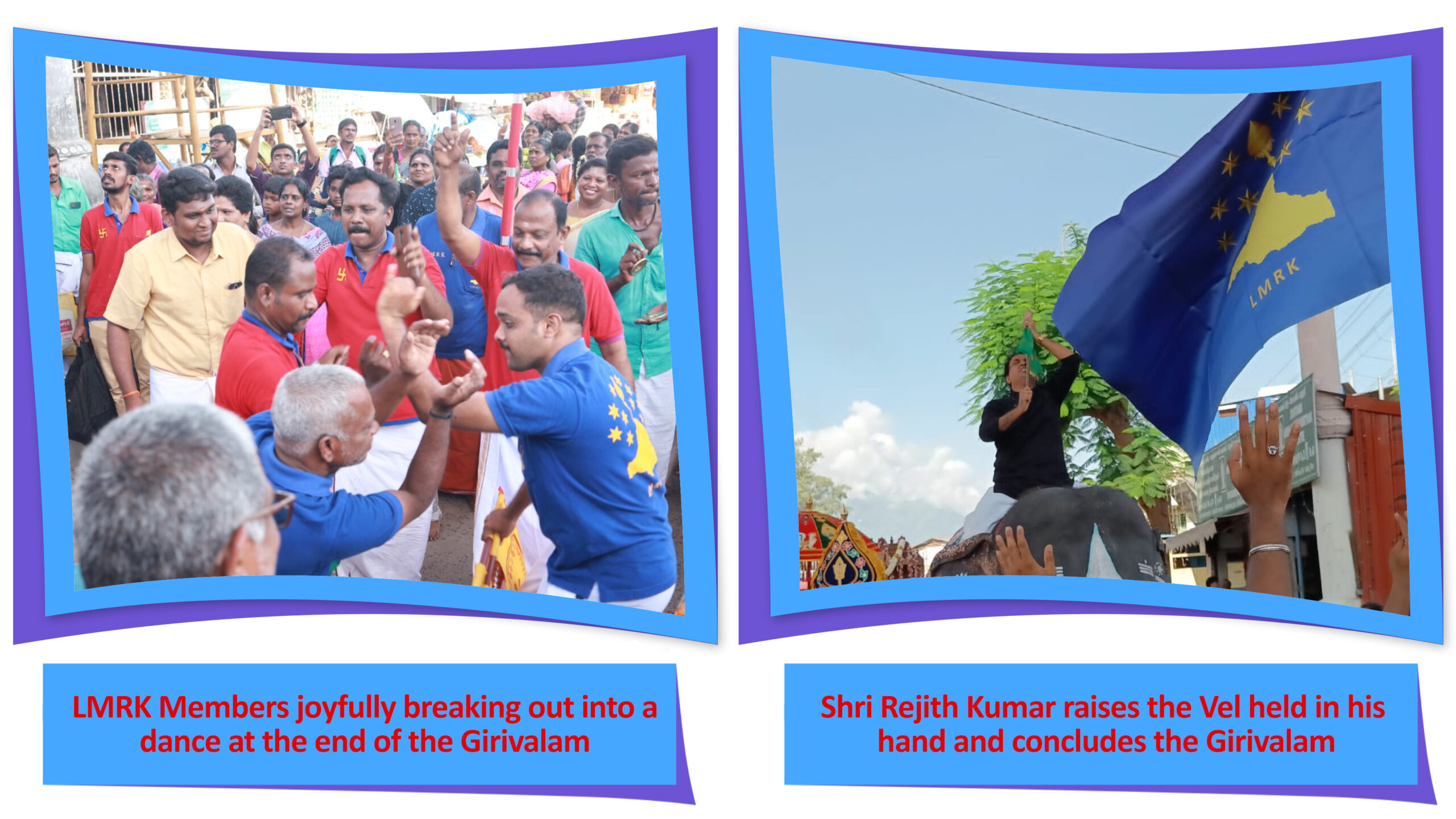 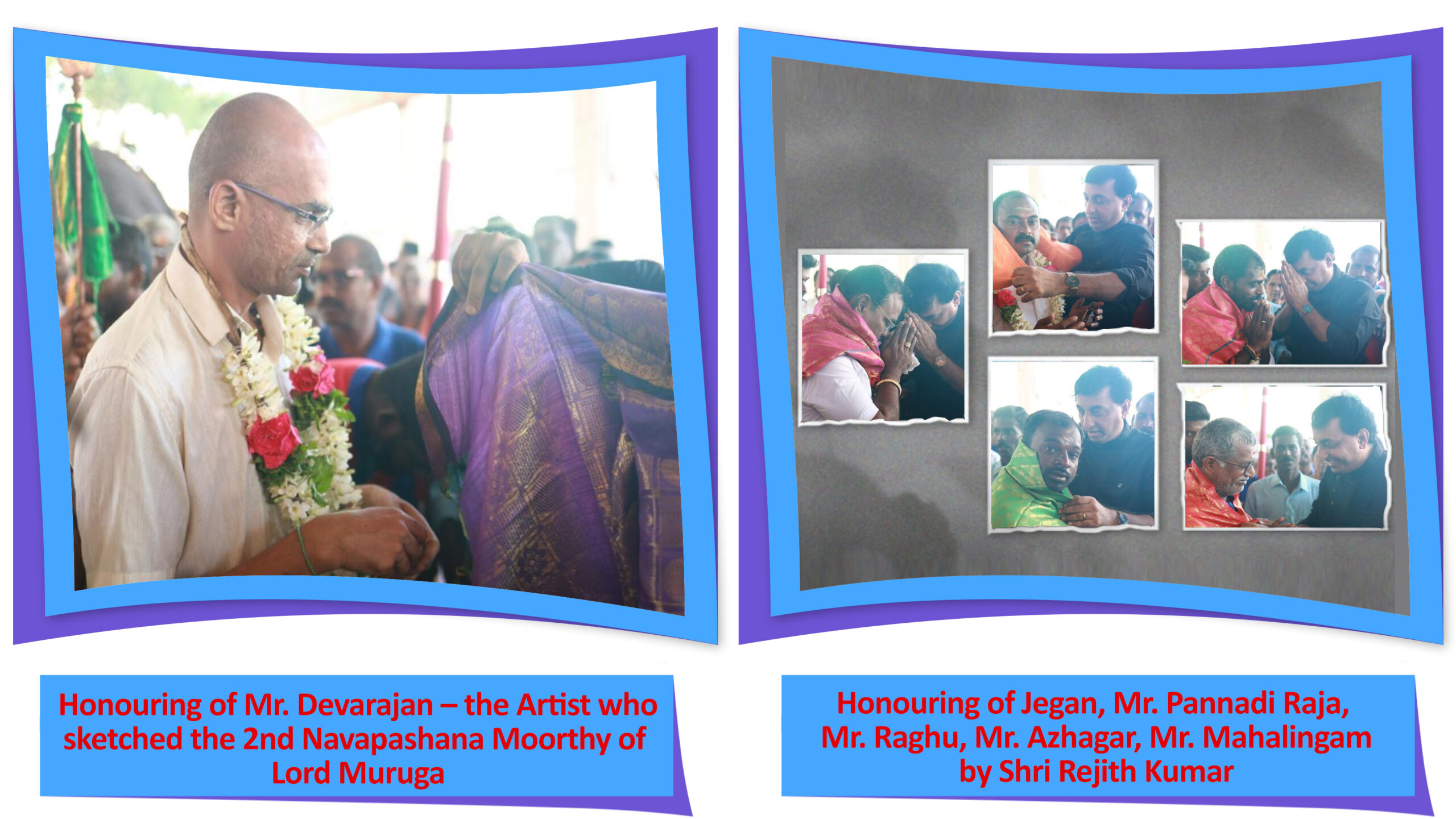 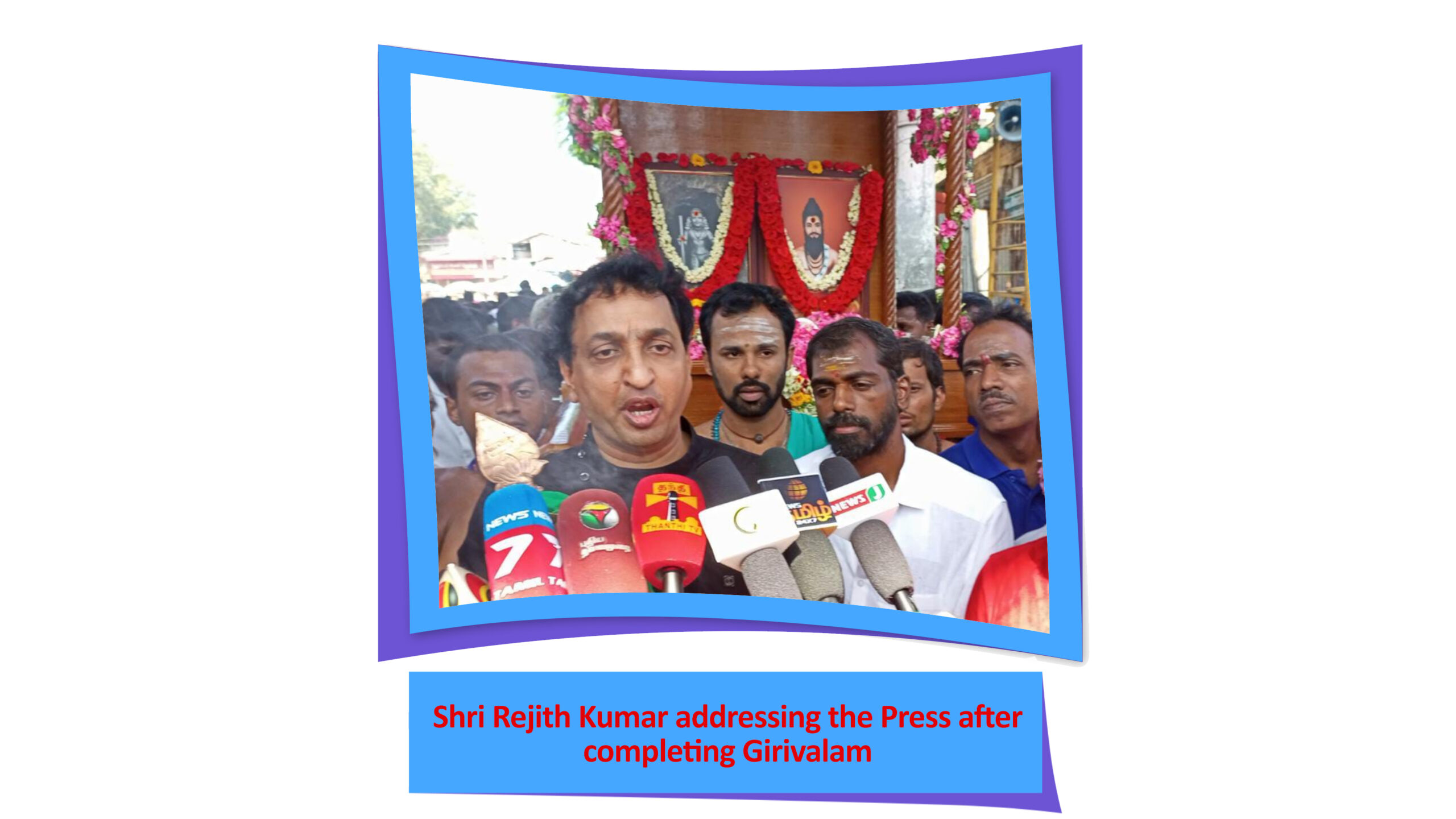 Do you know the difference between them? Siddhars share their spirituality with a scientific approach to the people such as Alchemy, Kayakalpa, etc. They do work related to the welfare of humanity. Bogar Nathar Siddhar is the disciple of Kalangi Nathar Siddhar. They belong to the Nath Sampradaya. Many Nath Siddhars are associated with Kedarnath, Badarinath, and Pashupathinath. Hence, these places have ‘Nath’ attached to their names.

Bogar Siddhar travelled to many countries including China. Lao Tzu the founder of Taoism in China was Bogar Siddhar. He had transmigrated his soul into a Chinese body to carry out his mission in China. The religion he preached to the people in China is Taoism. The ‘Tao’ refers to ‘Brahmam’ (The Supreme Cosmic Being or Absolute Reality). When Lao Tzu completed his mission in China he travelled back to India via Tibet where he was stopped by a gatekeeper. The gatekeeper who recognized the greatness of Lao Tzu asked him to write down his teachings. Lao Tzu’s teachings can be found in a book called ‘Tao-Te-Ching’. After writing down his teachings, he came back to India and then later on travelled to many countries again. He shared that Lord Muruga was the king of this world. When the Yuga changed (beginning of Kali Yuga) he created a Navapashana Moorthy of Lord Pazhani Dhandayudhapani and performed His Pradishta at Pazhani. He created another Moorthy – the 2nd Navapashana Moorthy and through his divya drishti foretold that again when there is a change in the Yuga the 2nd Navapashana Moorthy of Lord Muruga will be revealed to the world and through His divine powers will control the affairs of the world.

Thus, many thousand years ago, Bogar Siddhar through his divine insight could foresee the future and had made two Moorthies. Bogar Siddhar had performed the Pradishta for the First Moorthy of Lord Muruga at Pazhani and had left instructions about His mode of worship to his disciple Pulipani Siddhar. The 2nd Navapashana Moorthy of Lord Muruga had been placed by him at his Samadhi place. He foretold that its energy will come out when there is a change in the Yuga again. When the energy from the 2nd Navapashana Moorthy will come into effect – India will become such a powerful country that all other countries will look up to Her. The world will come to know about the Siddhas and the significance of Siddha Science. For this energy to come out in the world, the 2nd Navapashana Moorthy was created by Bogar Siddhar. He is said to have taken his Jeeva Samadhi after this.

What is ‘Jeeva Samadhi’? There is both a physical as well as an astral body. Siddhars normally take a Jeeva Samadhi. Siddhars after a time period drop their physical body and continue to work through their astral bodies Bogar Siddhar is such a great Siddhar. Today is his Jayanthi (the day of his birth star (Janma Nakshatra)). As you all know, LMRK Mission’s work is nothing but Lord Muruga’s work. It is Lord Muruga who has created this mission through His divine direction. This is the first time we are celebrating Bogar Jayanthi here at Pazhani.

In 2005, in the course of my spiritual journey, I first came to know about Bogar Siddhar. And till 2013, I was not aware of Bogar Jayanthi being celebrated in Pazhani though I had visited Pazhani several times. Now, our LMRK Mission has celebrated Bogar Jayanthi at Pazhani for the first time. Not only that, another significant point to note is that the Pooja is going to be done for the 2nd Navapashana Moorthy of Lord Muruga under His divine direction.

I welcome all of you to the Pooja including all those who are viewing it online. May all of you get Lord Muruga’s blessings! All of us here are going to pray for LMRK Members and their families. Those who are seeing this program online must have seen the Maha Girivalam – it is half the blessings. Some of you are going to pray from here at Pazhani and some through an online medium – so that you may touch the energy of Lord Muruga and receive the rest of the blessings. May all of you get Lord Muruga’s blessings! Om Saravanabhavaya Namaha”.