Maharaja Vikramaditya ruled over a worldwide empire from his capital Ujjain. He established several temples in Ujjain, one of which was the temple of Harsiddhi Mata more than 2,000 years ago. It is a place where he used to meditate and offer his prayers. He used to take the divine guidance of Devi Harsiddhi Mata before taking any decision regarding his empire. It is significant to know that this temple is considered as one of the 51 Sakthi Peetams.

Devi Sati the divine consort of Lord Shiva once wished to attend Her Father King Daksha’s Yagna (yagam). However, neither She nor Lord Shiva were invited for the event. When Devi Sati visited Her family during the yagna, instead of being happy to see Her, King Daksha hurled more insults about Her Consort Lord Shiva. Unable to tolerate this, Devi Sati self-immolated Herself in the sacrificial fire of the yagna. Lord Shiva manifested Veerabhadra to destroy the yagna. Lord Veerabhadra along with Goddess Kali and the Siva Ganas destroyed the yagna and killed King Daksha. Lord Shiva who arrived at the scene, took the subtle body of Ma Sati in His arms and began His tandav dance which shook all the worlds. To prevent its destruction, Lord Maha Vishnu with His Sudarshan chakra split the subtle body of Ma Sati into 51 pieces and they fell all over Bharatvarsh as it existed in the ancient days. It is believed that the elbow of Ma Sati had fallen in the location where the temple of Harsiddhi Mata now stands.

Who is Devi Harsiddhi Mata?

Harsiddhi, a contracted form of “Harshad Amba” – “The Happy Mother”. She is also known by the names like Harshal, Harshad, Harshat, and Harsidh Bhavani. As per the Skandha Puran, once when Lord Shiva and Devi Parvathi were spending time in blissful privacy, two asuras (demons) Chand and Prachand tried to forcefully enter Lord Shiva’s sacred abode in Mount Kailash. Lord Shiva directed Goddess Chandi to destroy them, which she did. Highly pleased with Goddess Chandi, Lord Shiva honoured her with the title ‘Harsiddhi’ meaning the ‘one who vanquishes all’. 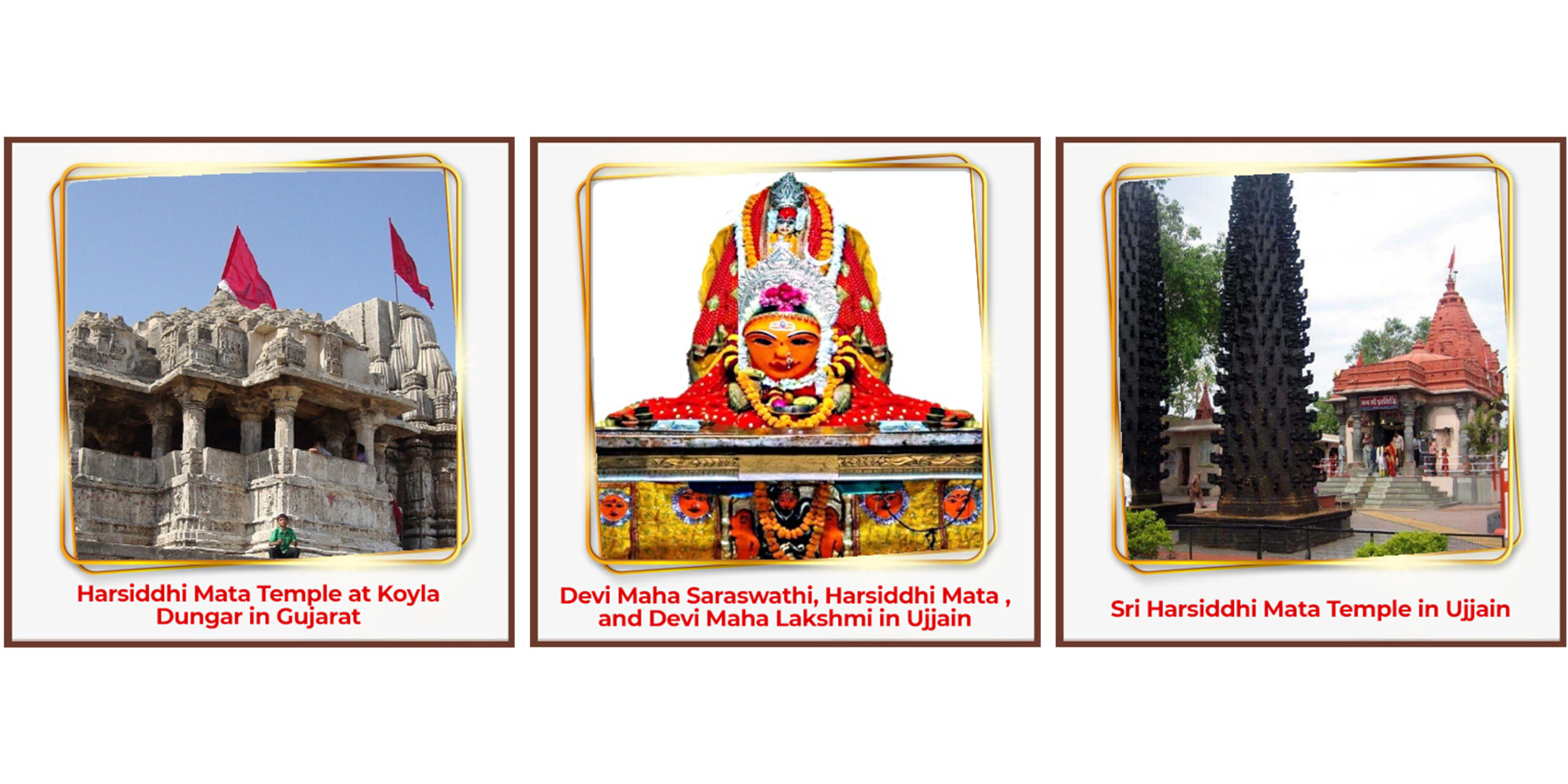 In the Dwapara Yuga, it is believed that Lord Krishna had prayed to Goddess Harsiddhi Mata before His battle with King Jarasandha and with Her blessings had vanquished him. He built a temple atop a hill for Her at a place called Koyla Dungar, which is about 30 kilometres from Porbandar city in the state of Gujarat.

It is believed that every 12 years Maharaja Vikramaditya used to do special Pooja for Devi Harsiddhi Mata who  was his aradhya devi. He used to offer his head to the Divine Mother, and She used to accept his offering and through Her blessing manifested a new head for him. He had offered his head 11 times and had got his head back, but during the 12th time when he offered his head, Divine Mother Harsiddhi gave him salvation through which he exited the earthly plane. Even today the 11 heads are adorned with Sindoor (Vermilion) and can be found at one of the corners in the temple premises, the locals believe these to symbolically represent the 11 heads of Maharaja Vikramaditya.

The Harsiddhi Mata Temple can be found 350 meters away from the Mahakaleshwar temple in Ujjain. This temple was rebuilt during the Martha period in 1447. One will find the Moorthies of Maha Saraswathi, Harsiddhi Mata and Maha Lakshmi vertically placed one below the other. Harsiddhi Mata‘s Moorthy is found placed in the middle adorned with vermilion.

The Sri Yantra representing nine forms of Devi Durga can be found inscribed on the inner roof of the temple. The Marathas who later rebuilt the temple added two iconic columns or ‘Stambhs’ which also act as placeholders of lamps. The right column is taller than the left and they are believed to represent Lord Shiva and His Divine Consort Goddess Shakthi and together hold 1011 lamps. The two columns look resplendent with lighted lamps and add to the divine aura of the temple during the evening Aarthi. The temple is especially decorated with flowers and lights during the 9-day Navarathri festival.

There is a small shrine for ‘Karakoteshwar Mahadev’ inside the premises of the temple. It has been built in remembrance of serpent King Karkotakan’s worship of Lord Mahadev during his avatarhood of Mahakal at Avanti.  It is believed that prayers offered at this shrine would relieve the devotee of Naga dosha. There is a shrine dedicated to Lord Chintha Haran Ganesh (Lord Ganesh who will relieve the troubles of devotees).There is a another small shrine dedicated to Devi Mahamaya within the Harsiddhi Mata temple premises. It is located below ground level and is approachable by steps. There is an ‘Akhanda Jyothi’ ever-burning lamp in the shrine on the outer wall of the shrine. However, only the priest can enter the shrine for offering puja and maintaining the lamp. 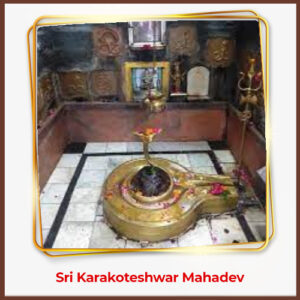 It is significant to know that during the Bharat Parikrama in March 2021, Shri Rejith Kumar was given the divine revelation by Lord Muruga that Maharaja Vikramaditya’s divine energies would henceforth be guiding the LMRK Mission in carrying out its duties. Subsequent to that revelation, it was also directed by Muruga Peruman that Shri Rejith Kumar and the members of the LMRK Mission are to seek the blessings of Devi Harsiddhi Mata of Ujjain before carrying out future LMRK duties.