The ancient city of Ayodhya can be found on the banks of the sacred river Sarayu in the state of Uttar Pradesh in India. Ayodhya is about 135 kilometres from Lucknow formerly known as Lakshmanpuri. Ayodhya was founded by Manu. Ikshvaku was the son of Manu and the predecessor of the Ikshvaku dynasty to which Lord Sri Ram belonged.

Nageshwarnath temple was built by Raja Kush, the son of Lord Sri Ram in Tretha Yuga. It is located at Ram-Ki-Pairi in Ayodhya. As per the local legend, Raja Kush lost his armlet while bathing in the Sarayu river. A Nag-Kanya who happened to be there fetched the armlet out of the Sarayu river and gave it to Raja Kush and also fell in love with him. Raja Kush is said to have erected a temple in her honour as she was a devotee of Lord Shiva. This temple came to be known as ‘Nageshwarnath Mandir’. 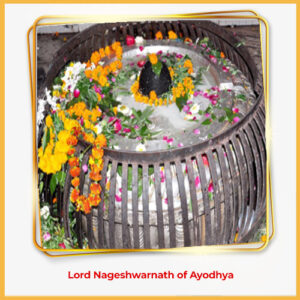 Maharaja Vikramaditya following the divine direction of Lord Ram asks Prayagraj (the King of Teerthas) the location of this ancient city. However, during his travels, he forgot the location and requested a sage to direct him to the location. The sage advised him to let loose a cow and a calf and allow it to roam. He then said that on reaching Ayodhya the udder of the cow will start oozing milk, and that this exact spot would be the location of the ancient capital Ayodhya of Lord Ram. It is as per this direction Maharaja Vikramaditya first came across the Nageshwarnath temple in Ayodhya, while the rest of Ayodhya city was said to be covered by forest and fallen in ruins. Maharaja Vikramaditya is said to have spiritually rejuvenated this temple along with other significant sacred places in Ayodhya.

(The local oral tradition recorded by Robert Montogomery Martin in 1838 mentions that the city was deserted after the death of Lord Ram’s descendant Brihadbala. The city of Ayodhya had remained deserted till King Vikrama of Ujjain came searching for it, and reestablished it. He is said to have cut down the forests that covered  the ancient ruins, erected Ramghar Fort, and built 360 temples).

One such place which deserves special mention is ‘Kanak Bhavan’. Kanak Bhavan is said to have been last renovated by Queen Vrishbanu Kumari in 1891. She is also said to have done a Pradishta of Lord Ram and Mother Sita here. Kanak Bhavan is also known as ‘Sone-Ke-Ghar’ (House of Gold) mandir is built in the style of opulent places of Rajasthan and Bundelkhand. 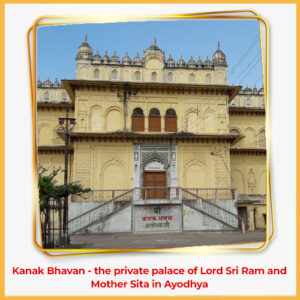 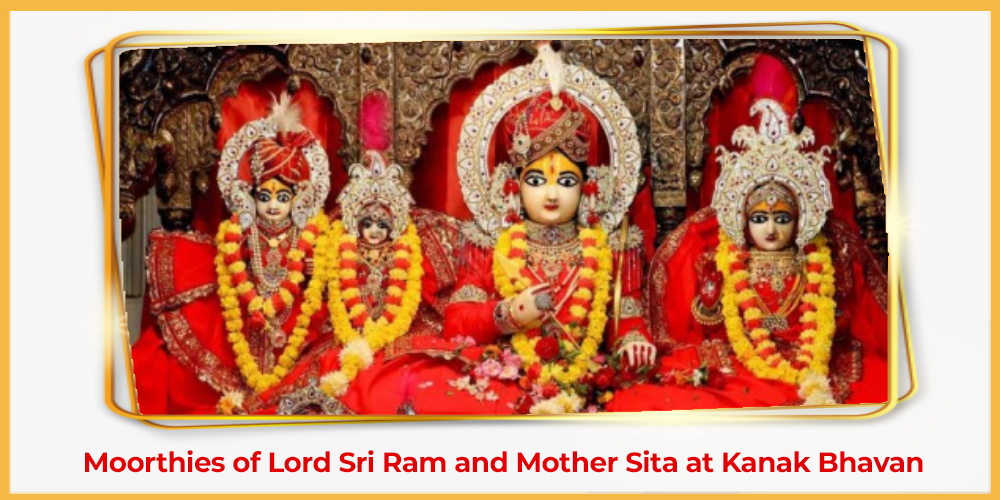 As per the native folklore, Queen Kaikeyi is supposed to have gifted this place to Mother Sita after Her marriage to Lord Sri Ram. Another version of the legend is that this palace was gifted by Lord Sri Ram’s stepmother Queen Kanak Bhavan – the private palace of Lord Sri Ram and Mother Sita in Ayodhya Moorthies of Lord Sri Ram and Mother Sita at Kanak Bhavan Kaikeyi to him after His 14 years of exile from the forest. It is said to be the private palace of Lord Sri Ram and Mother Sita. In Dwapara Yuga, Lord Sri Krishna went on a teerth-yathra with His consort Devi Rukmini and visited Ayodhya during his pilgrimage. He is said to have spiritually revitalised many places in Ayodhya. One among them is Kanak Bhavan. Here, He came across a woman meditating on Lord Sri Ram and was deeply moved by her devotion. He gave her a Moorthy of Lord Ram and His consort Devi Sita and asked her to keep Them in prayers during her lifetime and before her death to bury the idols. He also revealed to her that this would be found by the right person as per divine timing. As per local belief, it was none other than Maharaja Vikramaditya who during the renovation of Kanak Bhavan is said to have found the idols given by Lord Krishna.