According to “Tripura Rahasya Mahatmya”, the place where the temple of Devi Gadhkalika Mata stands used to be the ancient city Avantika. During a natural calamity, Avantika was buried by a terrible sand storm, but the temple inside the fort was found unharmed by the grace of Kalika Mata. The devotees began to refer to Her reverentially as ‘Gadhkalika’ or ‘Garhkalika’ as Her temple was housed inside a ‘Gadh’ or ‘Garh’ which means ‘Fort’ in Hindi.

Who is Devi Kali?

Devi Kali is the feminine aspect of “time” or “the fullness of time” with the masculine aspect being “Kala”, otherwise Lord Shiva. She is the ultimate manifestation of Shakti and the Mother of all living beings. As per the tribal folklore deeply rooted in the history of mankind, the name ‘Kali’ first appears in the Atharvana Veda. 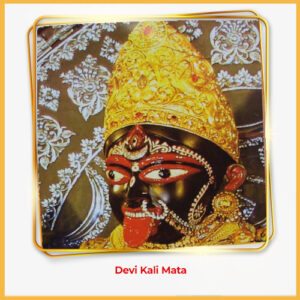 Linga Purana describes that Lord Shiva asked his consort Devi Parvathi to defeat the Asura Daruka, who could  be slayed only by a woman. Goddess Parvathi merged Her divine essence with Lord Shiva and is said to have manifested as Devi Kali to slay Daruka.

One version relates that when warrior Goddess Durga, fought with Mahishasura (or Mahisa), the buffalo demon, She became so enraged that Her anger burst from Her forehead in the dark form of Devi Kali. Once born, Devi Kali is said to have eaten all the Asuras She came across, stringing their heads on a chain that She wore around Her neck. It seemed impossible to calm Devi Kali’s deadly attacks, which now extended to any wrongdoers, and both people and Gods were at a loss as to what to do. Lord Shiva stopped Devi Kali’s destructive rampage by lying down on Her path, and when the goddess realised who She was standing on, and She finally calmed down.

Thus the divine word Kali has a plethora of meanings, one of them can be referred to as “force of time”. In this aspect, She is considered to transcend beyond the constraints of space and time. She existed before the Universe was created and will continue to exist even after the end of the Universe. Limitations of the physical world do not apply to Devi Kali Mata. She is a symbol of Mother Nature Herself- primordial, creative, nurturing, destroyer of evil, and the protector of Her devotees. She is adored by Her devotees as a mother and is referred to as ‘Kali Mata’.

As per the local folklore this temple was established during the Mahabharata period but the idol of Gadhkalika Mata is even more ancient and dates back to the period of Sat Yuga. It is mentioned in the Puranas that the lips of Devi Sati fell on the Bhairav mountain near Shipra River in Ujjain and it is at this place the Gadhkalika Mata temple was originally built. She is considered an important deity for the practitioners of Tantra and seekers of Siddhi. She is considered the divine consort of Lord Mahakaleshwar.

In Linga Puran there is a mention that when Lord Ram was returning to Ayodhya after His victorious defeat over King Ravana.  He is said to have halted His journey for a while at the banks of Rudrasagar in Ujjain. It was during the same night Devi Kalika Mata had set out in Her fierce form and had tried to capture Lord Hanuman. When Lord Hanuman revealed His Viswaroop (cosmic form), She is said to have changed Her mind and left the place in a hurry. During this encounter, a part of Her body is said to have melted and fallen and it is believed that a temple for Her was built at the very same spot which later came to be known as Devi Gadhkalika Mata’s temple. 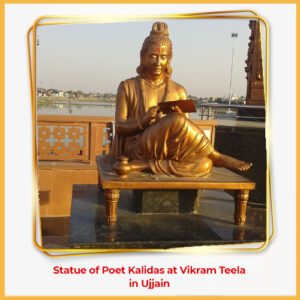 It is significant to know that Maharaja Vikramaditya used to come and worship at this temple. It is also the temple where Mahakavi Kalidas got transformed by Devi Gadhkalika Mata’s grace into a genius poet and a scholar beyond compare and came to be known as ‘the Son of Devi Saraswathi’ for his exceptional brilliance. The title ‘Kalidas’ was conferred on the poet for his ardent devotion to Devi Gadhkalika Mata.

There is a practice of students coming here to pray and get their pens, pencils, and slates blessed by Devi Gadhkalika Mata. In remembrance of Mahakavi Kalidas’s great devotion to Divine Mother Kalika, She is duly worshipped before the planning of the special event for Mahakavi Kalidas begins every year in Ujjain. 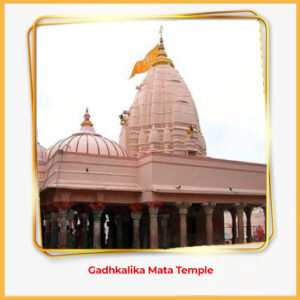 Some scholars believe that during 606 AD this ancient temple of Devi Gadhkalika was reconstructed by King Harshwardhan of Thaneshwar (currently known as Haryana) when he visited Ujjain. It was last rebuilt by the rulers of Gwalior who restored this holy shrine to its former glory. Archeological digging held near the temple premises unearthed bricks, a part of the plinth, and other sculptures that were affiliated to various periods. The area around the Gadhkalika Mata temple had been the site of the ancient settlement from around the 8th century BC right up to the Paramara period. Even today people find ancient coins in this area. There is a direct route connecting Gadhkalika Mata temple with Gopal Mandir.

The Gadhkalika Mata Temple is located in the Kalighat area of Ujjain. At the entrance of this beautiful temple, there is a statue of a lion – the divine vehicle (vahanam) of Kali Mata. The temple complex also houses two lamp pillars (Deep Stambh) which act as place holders for 108 lamps each. These are lit especially during Navaratri. Thousands of devotees gather to take the darshan of Gadhkalika Mata and take Her blessings. 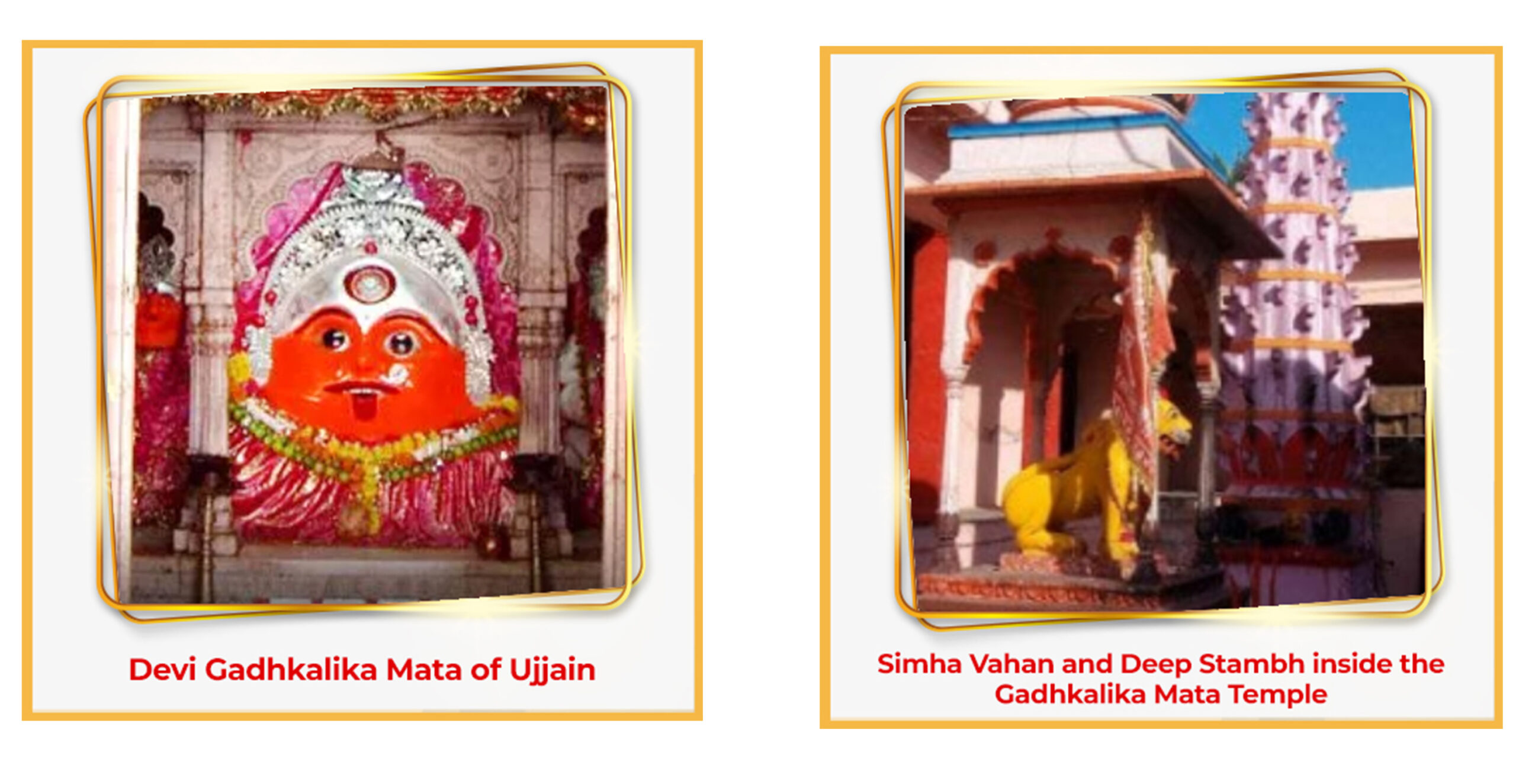